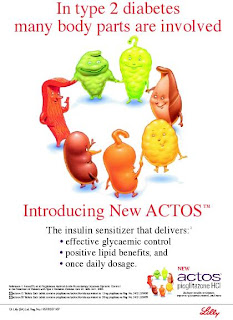 FDA reviewing preliminary safety information on Actos (pioglitazone):
The U.S. Food and Drug Administration today announced it has begun a safety review of the diabetes drug Actos (pioglitazone), after receiving preliminary results from a long-term observational study designed to evaluate the risk of bladder cancer associated with use of this drug.

Meanwhile a group of Doctors in America have researched a drug free, free of dangerous side effects , way of tackling the Diabetes epidemic now the scourge of the Western World - eat real food! Physicians Committee for Responsible Medicine PCRM are gathering information from ongoing research that shows a Plantarian Diet can have a dramatic effect on type 2 (and in some cases type 1) diabetes.

This is pretty much the same diet used by President Bill Clinton to lose weight and deal with his heart disease.
The Diet does come with a health warning ! The effects are so dramatic that you have to carefully watch your medication and be prepared to reduce the dose otherwise you may have an overdose.

The Food for Life Alliance has recently trained instructors in the diet principles and will soon be conducting a number of free workshops around the UK starting with Stoke , Birmingham and London.
cancer diabetes drugs plantarian type 1 type 2 warning

Healthy ♥ Habits said…
I really like your blog!
Check mine out at

dahlan epsoner said…
I was very encouraged to find this site. Good Post, i would like to know about more updates.