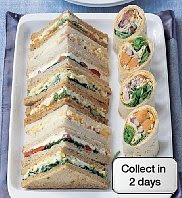 The health risks from pre-packaged sandwiches have been featured in several newspapers, with The Times featuring the headline ‘Cheese and pickle sandwich and a heart attack’ and the Daily Mail warning that, ‘Ready-lunch can contain as much [salt] as 12 bags of crisps.’

The newspapers have highlighted the hidden levels of sugar, fat and salt in a number of popular high street sandwiches, saying that one Asda cheese sandwich was found to contain more saturated fat than a Big Mac. Other examples include a Marks and Spencer cheese and chutney sandwich containing over five teaspoons of sugar, and Subway’s six-inch meatball sandwich containing 4.7 grams of salt- more than three-quarters of the recommended daily limit for adults.

London Nutritionist Yvonne says "I was on a panel with Greggs the bakers just a few weeks ago and this subject came up. They at least are committed to reducing salt and hydrogenated fat. I am also concerned how difficult it is to buy wholemeal bread sandwiches. There are 'brown' bread sandwiches but it is often just white flour with some added brown bits. So many nutrients are lost when breadflour is refined it's almost as much of a problem to health as the sugar and salt."
health research