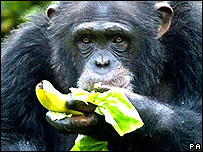 Overall, their cholesterol levels dropped 23%, an amount usually achieved only through anti-cholesterol drugs statins. (Which are recently reported to have newly discovered side effects)

Interestingly their insulin levels were balanced too.

I make that 3 : 0 to Fruit & Veg vs Drugs in the fight against coronary heart disease, diabetes and digestive health.

The BBC also report that consumption of Fruit and Veg in the UK is up (by nearly 13%) but London Nutritionist Yvonne Bishop-Weston says that consumption needs to at least double to make a significant positive effect on health. 'Most people eat nowhere near the 5 a day goal and the optimum consumption should be more like 9-10 hand palm sized portions of fruit and veg a day'